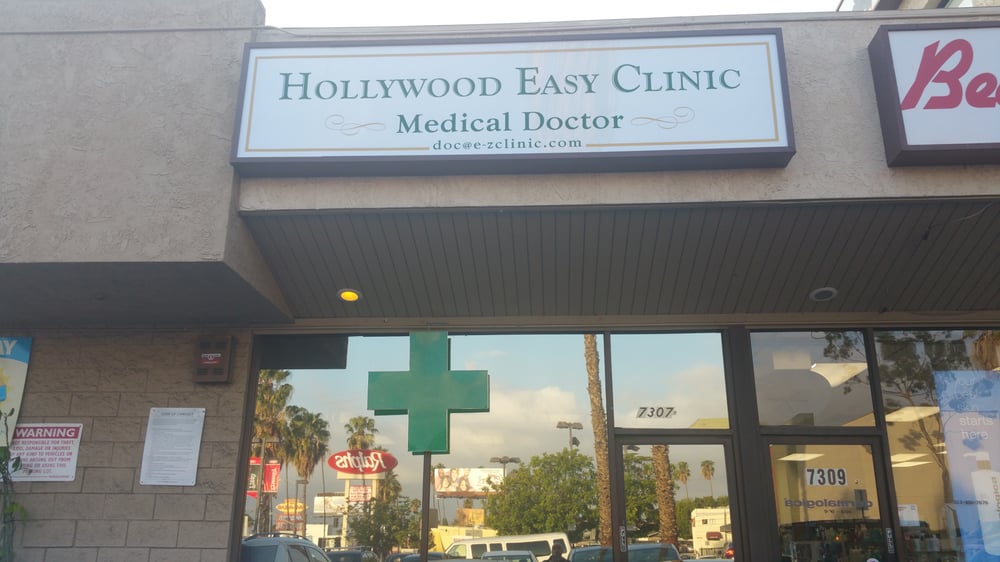 “I LOVE that they have several new locations central to all that I do and live. These guys are super helpful, honest and very welcoming. I was in a car accident some years ago and am very thankful that the process of obtaining my renewal card is simple and painless. Clean facility, abundant parking available, super affordable, and all around chill experience – usually going to the doctor sucks but this is not the case here…

This clinic has been my go to for a few years now. Justin even remembered me and was quite helpful. I also love how central it is to both work and home. Both the doctor and the front desk are extremely helpful and I didn’t have to wait long at all. The doctor also recommended some exercises I could do for my knee. And to meditate- where does one ever hear that!!? I always recommend this clinic to people I know. They even have an option to renew online. Pretty cool”

How to get medical marijuana card 90010

Medical Marijuana Card Doctors in Hollywood Los Angeles California accepting international, out of state, and patients under 18 with parental consent. New patients $55 for full year and $45 for returning patients. $5 discount for paying in cash. No hidden fees.

Medical Marijuana Card Doctors Hollywood Los Angeles scams are abundant . These doctors offices are not run by Medical Marijuana Doctors but are run by individuals with criminal pasts and felony charges. Cannabis is a natural medication that helps many patients with serious illnesses and unfortunately it is these patients who are most prey to these Medical Marijuana “Doctors”. To help you we have put together a how to avoid medical marijuana card doctor scams.

1. There is a medical marijuana doctor group in Hollywood that will ADVERTISE a price around $29 or $30, but when you show up they will state that the price only reflects a month, 3 months, 6 months, etc. But if you want a full year recommendation it will cost you different prices from $70 – $100…………….To AVOID this situation, call ahead and ask what the price truly reflects. Get the name of the individual you spoke to and lock in your price. Bring the advertised price printout with you and state the conditions. If you get taken advantage of, write a weedmaps review.

2. These medical marijuana card doctors in Hollywood and Downtown LA will have a UNLICENSED doctor as the Medical Marijuana Doctor on your recommendation. You show up to your patient group or dispensary and they won’t let you in because your medical marijuana doctor is unlicensed, on probation, had their DEA revoked, charged with MEDICARE or MEDICAID fraud, WORKERS Compensation FRAUD, has a cocaine problem, etc….To avoid this scam call ahead and ask who the medical marijuana doctor is and their license, ask if it is in good standing. Then check yourself online with the medical board.

4. You attempt to apply for a medical marijuana card with the county of Los Angeles, but your medical marijuana doctors office doesn’t have a fax, can’t find their medical marijuana doctor, or they can’t find your medical records…To avoid this ask the office how long their medical marijuana doctor has been at the office, if the doctor is owner of the clinic and how many days the doctor is at the office. (Many clinics will have temporary doctors come into their office that are brought in by a headhunter and are impossible to find when you need them to either sign a document for you or even testify for you in court.) Then ask them if you can fax your medical records to them in advance. If any of these questions cause suspicion look somewhere else. Based upon the Easy Clinic model, get a thorough physical, evaluation and fast management of your condition. All of your information is 100% confidential as we could lose our license to practice medicine for giving away your information. $20 Wallet Sized Recommendation. Never forget or lose your recommendation again! Accepting HSA (Health Savings Accounts), FSA (Flexible Spending Accounts), credit cards and debit cards with a fee. Our medical marijuana doctor is educated in the multiple types of cannabis including cannabis indica, cannabis sativa, and cannabis ruderalis. Our medical marijuana doctor is educated on the multiple types of cannabinoids including cannabidiol (CBD) and Tetrahydrocannabinol (THC) the balance of the two, the multiple other cannabinoids, and the healthiest type of cannabis strain, product and method of intake. Make your appointment today.

The founding doctor of Medical Marijuana Card Doctors in Hollywood earned his Doctorate from the University of California in Los Angeles, and served his residency at the University of California at Irvine Hospital, specializing in cosmetic surgery. During his practice, he initially discovered the power of medical cannabis when several of his patients brought its purported benefits to his attention. After in-depth research, the doctor uncovered a lack of availability for patients seeking this valuable medicine. He, therefore, chose to specialize in medical marijuana, making access to its relief more available to patients in the Hollywood area.

Gathering together a team of doctors hailing from many medical fields, he opened Medical Marijuana Card Doctor with the mission of providing a safe and legitimate clinic where patients could receive evaluations for medical cannabis access and use. Medical Marijuana Card Doctors emphasizes doctor-patient connection fostering and education-based community where dialogue flows freely, and the information is easily accessible. Every doctor on staff is a board-licensed medical physician from a spectrum of medical fields. They work closely with their patients along with their journey to wellness, and providing education on different aspects of cannabis is of utmost importance. Medical Marijuana Card Doctors offer affordable prices for their services and are proud to offer discounts for veterans as well as renewal evaluations. Their doctors are available to answer follow-up questions by either email, phone or text message, and both walk-ins and scheduled appointments are available. Service

Location Information: We are the growing marijuana and growers specialist clinic in Los Angeles. A cannabis cultivation license aka cultivation recommendation is really an exemption recommendation above the standard 6 mature plants. These are sometimes referred to as a grower’s license or grower recommendation, but those are misnomers as any patient with a recommendation can grow. California patients can grow up to their medication requirements but no more than 99 plants. This should not be confused with the vendor licenses or collective grower authorization issued by a cooperative or collective. Collective grower authorizations are issued to caregivers that grow on behalf of a cooperative.

Notice to Consumer: The Compassionate Use Act of 1996 ensures that seriously ill Californians have the right to obtain and use marijuana for medical purposes where medical use is deemed appropriate and has been recommended by a physician who has determined that the person’s health would benefit from the use of medical marijuana. Physicians are licensed and regulated by the Medical Board of California and arrive at the decision to make this recommendation in accordance with accepted standards of medical responsibility.
LA tramadol
tramadol california